Mi, I have to report that I am sad today.  You know what that coffee filter did this morning? It did not yield decoction for me. Wait, let me tell you the whole story.

I woke up at 6 am, switched the geyser on and said hello to God.

Then I set the milk to boil along with the pan of water for the coffee filter on another burner. I arranged our little soldiers – the coffee filter, A cup for God, Vidur’s glass, Surys’ mug, My XL tumbler – in a row. I added Horlicks in Vidur’s glass, a little sugar in God’s cup, coffee powder, enjoying its aroma in the filter and sugar in the rest, according to the person, for coffee.

As the milk took its time, I cut the bhindi (Okra – ladies’ fingers) for subzi. By the time I cut two bhindis, the pan of water was boiling merrily. I switched off that burner, eagerly picked up the pan and poured the necessary water into the filter, on the powder.

And waited for the tick, tick, tick sound of the decoction filtering through to the bottom half, as usual.

The milk began to rise and switching that burner off, I poured some in Vidur’s glass and God’s cup.

Imagining I was hearing the coffee filtering through, I continued to cut the bhindi. Then I started cooking the subzi.

I kneaded the dough for parathas for Sury. I got the dosa batter out from the fridge for Vidur’s lunch.

Then Sury and Vidur woke up and I made Sury’s coffee.

But I noticed there was still water in the top half of the filter. A filter that usually takes a few minutes to yield the decoction for that sacred first coffee of the morning. I Arjun-Rao-ed it and got on with my work.

Then when the subzi was ready and the dosas made, before I started making the parathas, I decided I deserved my coffee. Added milk to my XL tumbler. And expectantly peeked into the filter. Fancy my surprise when I saw the water still stagnating there. Grr. Hopefully,  I disengaged the bottom half and saw nary a drop there.

Now, I had built up so much anticipation for the coffee that I needed it. There was some good decoction left over from yesterday. I added that to the coffee and enjoyed it, looking at the filter questioningly. Ah well, PMS for the filter, I thought. I am understanding that way, you know that. Attributing all sorts of human feelings to non-human objects. But I reckon that the filter is a member of our family – and so, I believe in giving it its rights.

Thus, I finished my coffee, albeit a little disappointed in the filter, and I made the parathas as I had an 8 am deadline.

Then I packed the dubbas. By which time Sury and Vidur had had their breakfast and were dressed to go. With the filter on my mind, I dropped Vidur at school and returned home after fueling the bike. Once I got home, I kinda made the living room look better, picking up stuff and remembering the coffee, headed to the kitchen before I sat to work.

I was amazed to see the water still sitting on top. And nix in the lower half of the filter.

NOT AS USUAL, I SAY!

I had to take matters into my own hand. And then I realized we had never made coffee without a filter, unless we were drinking instant coffee, which was rare. I recalled you saying once, that people prepare their coffee from coffee powder just like they make tea. Yuck, I thought. But I could not waste perfectly good coffee powder.
So – I removed it from the filter, put it in the pan I use for boiling water and brought it to a boil. Feeling bad all the time. Because making coffee must be a gentle affair where I lovingly add the boiling water to the powder to produce the decoction.  Sigh. I switched the gas off and let the pan sit for a minute before using the tea-strainer to filter the coffee. I heated the milk and added some of the coffee to it. Added a little sugar, listlessly. Mixed the contents of my glass. Tasted it. It was…uh….uh….okay. Reminded me of  சில பேரு வீட்டு காபி.

By now, the whole kitchen and its surroundings were filled with the aroma of coffee – quite like when we pass those coffee outlets where they roast and grind coffee.

And I laughed to myself, thinking of how we would talk about our coffee filter judging people – producing the decoction for those it(we) liked and taking ages to percolate for those it (we) did not like so much.

Did it dislike me today?

Oh well, what it lacked in taste it made up for in aroma.

And thus I had my coffee today in an aromatherapy-like ambiance. 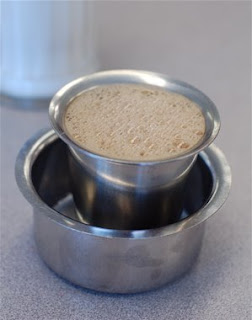 Can’t take anything for granted, eh?  Especially coffee. Why should I get so worked up when you’re not here to share my coffee with me?