Our Version Of Earth Day

Yesterday, the day began just like any other, with the usual morning stuff, Mi. Two packets of milk got spoilt, as usual. There was a power-cut. There was water shortage. Not enough water in the bottles. As I said, a usual morning. I actually got some long pending outside work done – had some work at the bank. Then had to get some documents signed in school. Later in the day, I had a meeting at the Clinicom office, so I even finished washing my hair in the morning. So far so good. Got everything done.

Then it was time to get Vidur back from school. We arrived home. He bathed. Just before lunch – the skies dramatically darkened. I smelt rain. The way it looked, it was going to be a lasher. So I quickly shut all the windows to deter the rain from flowing inside, depending on its direction. Naturally, the verandah was full of white clothes 🙂 that I had washed in the morning. Then, the house became pitch dark. The power went off, preparatory to the rain. And then it happened. Oh baby, did the skies open up!! Talk about ushering in Earth Day in style! I thought someone was pelting our windows so hard the glass would break. Phew! Heavy rains, obviously with hail, the likes of which we’ve not seen before. Vidur and I huddled near the verandah door, enjoying the soft spray of the rain and watching the hail hit the parapet. At least it was oh, so cool.  A welcome reprieve from the heat. But stalwart trees have been uprooted in the force of nature’s expression and of course, there’s the usual mayhem and madness everywhere with drainage overflows and road being tough to tackle.

Couldn’t figure out how to go for the meeting at 4.30 – but you know what they say about Mahomet and the Mountain. So they came home instead and all was well. It continued to rain, although the intensity became less around 7 pm. Sury came home, totally drenched. All evening was spent in darkness, because the voltage was very low and even that fluctuated like crazy. So it was an impromptu candlelight dinner for us.

This morning, there was no power when we woke up and no water. But I should appreciate that the milk didn’t ditch us as usual. :-). I tell you, I am getting to be like you in making rotis. I think the mere thought of Ubbar Singh makes them start puffing up. :-). I know the secret now! Ha ha ha ha, a la the villains in old movies!

Incidentally, the day before yesterday, we went and bought clothes for Vidur. He insists on wearing full pants now. And to manage between the two pairs he has now is being a bit too freaky. So we also got some tshirts, at the shop guy’s recommendation. Now the challenge is to clear out his cupboard and drawers of the stuff that does not fit him. He’s promised to help this weekend. 😀

Just imagine, he used to maaro your chappals, then Sury’s sandals, then my shoes…now none of us fit into his shoes. I just can’t help, however, thinking of the smiling baby we cuddled when I see him. Dumb mom, right, yeah. I used to grab him from behind and smooch the back of his neck. Now I have to stand on my toes and do it – that is, if he’ll allow me. He is still pretty affectionate…but there’s a difference you know. Sigh.

Today, Vidur has a poster competition at school, being Earth Day. 🙂 He’s gone, full of ideas 🙂 I’ve got the 4.30 meeting as usual, being Thursday. Got loads of backlog to tackle.

Here’s a pic of you and Vidur – Nov. 14, 2005, when he went as Ganesha for the fancy dress competition at school. What fun we had putting that costume together! 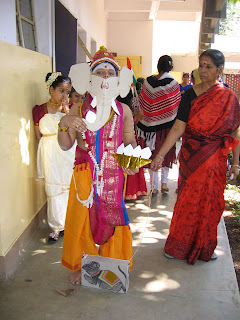 Okay. Now I need my kaapi.

One thought on “Our Version Of Earth Day”