“Diary writing is far more than a way of exorcising one’s unhappiness. The effect is extraordinary. Distanced on paper, troubles shrink to their true size. You can regard them objectively and see how temporary they are….Devi”

Wow. Just like you to write something like that! I continued to search for the recipe diary and found an identical one where you had written a lot of stuff. Turned out to be your diary – during the three months after I got married and went to Bombay – before you joined us in July. So beautifully expressed. The diary begins with the words:

Reminded me of all those letters you wrote me when I was away in Mount Mary’s. I still have some. I would love it that you always sent a greeting card and wrote a letter on the inside left flap.  You had a beautiful handwriting and always had a way of expressing yourself. Hugggggggs.

Yesterday was a little hectic with coming back from school and then not being able to sit at the computer as I got busy in the kitchen. The amount of housework there is to do is thalai suthing. Kill all those people who say “my wife/mother/whoever doesn’t work.” to imply they don’t go out to an office and work! Heck. Housework is far more strenuous. And in one like ours where we insist on making all the basic stuff – 🙂 God help us. He he…wouldn’t have it any other way no? Crazy chix.

This morning, the rotti maavu turned out just the way you like it. I thought back on that day when you had mixed the batter…and I tried rolling it out – put it on the tava and found that it extended all the way from the granite slab to the tava 😀 Couldn’t stop laughing! Anyway, somehow managed and packed it up. By the way, bhoole bisre geet on vividhbharti this morning was just what you might have farmaaished! Here’s one of your favorites – in fact Sury was quite senti since he also loves all those songs – and sings them so well. This one is Mukesh in Anari for Raj Kapoor – Kisi ke muskurahaton pe…Just your kind of lyrics too…

I went over to Dr Raghu Hiremagalur’s clinic yesterday to give him the extra medicines and Calcitonin spray. I think he appreciated that we wanted to donate them. You know its so funny these days, not stopping at any medical store? In fact it is quite some time since I even visited our 17th cross store. Somehow, I don’t feel like stopping there. Did I tell you I settled with Ganesh Medicals and Pushyamee Medicals? I returned the bedpan etc. along with the other extra unused medicines. Still have to get the discharge summary from the hospital though. Why can’t I get over the feeling that you’ll be back? 🙁  I still have the awful task of closing bank accounts and what not.

Mi, Sury and I are talking about creating an award for excellence in your name for a deserving student – maybe in Vidur’s school. Not sure how to work out the details…but this is an idea we have. Or some kind of trust fund where we help deserving students study further. I’ll keep you posted. Let me also talk to a few people for some good ideas.

For us, you are immortal! Here’s a pic you really liked from 2005. What a fun trip that was, remember? Now Vidur is just one head taller than us! 😀 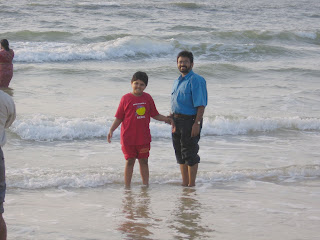 What’ll I do with all those notes you have painstakingly written? 🙂

One thought on “Just A Regular Update.”