Positive thinking is a great concept. In fact, I am a firm believer of the silver lining in any situation. If nothing else, I cannot argue with the learning that emerges from it and for that, I am grateful for every experience. Yet, there are times when everything looks bleak, Mi.
Like the time when you were diagnosed with idiopathic interstitial lung disease back in 1997 – we struggled to find out why you were coughing your life away and why you were losing weight so rapidly. We ran from general physician to cardiologist to hospitals for tests and CT scans to figure out what was wrong. You went through several courses of medications – and would often joke that it was probably those that were making your condition worse. In a sense, maybe. And then the first silver lining appeared. Vidur was born and became the center of our Universe.
But we still had to find out what was wrong with you. And then, while discussing it with the gynaecologist I was consulting, she suggested we see a friend of hers, a Chest Physician – a pulmonologist.
Then came the next silver lining – sort of a mixed one – because now we knew what was wrong. It was a good news – bad news kind of situation. The good news was, we knew you had a pulmonary fibrosis
and the bad news was – there was no cure. We were so afraid when you had to go through that bronchoscopy! We almost thought we lost you at one point – but you managed to pull through. Then followed days of tests and scans. Inside we were afraid but we kept up a cheerful front.
The doctor gave you six months to a year. That was the worst moment of my life. Your first question was whether you could still hold your grandson – and the doctor assured you that your condition was not contagious. You thanked him profusely and said that if you couldn’t cuddle your grandson, you didn’t need the “extra time”. You were so cool about death.
Medication started, and you started to look and feel better. 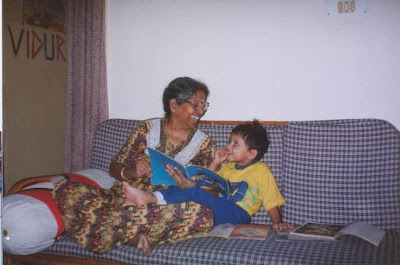 Mi, God was kind to us. The biggest and thickest silver lining was we had you for twelve years after that. 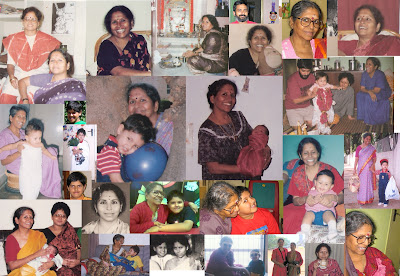 You withstood surgeries, pulmonary and spinal Tuberculosis and unbearable pain through it all.
The silver lining was our orthopedic who promised to cure your spinal TB without surgery, and did. After three months of complete bed rest, your back healed. You were mobilized. We rejoiced, believing that January 2010 was the beginning of a healthy phase in your life.
Alas – the latent lung fibrosis could take no more – and we rushed you to the hospital on Feb 3, 2010 with a collapsed lung.
You never recovered.
Five days in hospital on a ventilator and complete life support.
On Feb 8, your spirit gave up and you passed away at 10.30 am.
We donated your body, as per your wish, to St.Johns Medical College, Bangalore.
The silver lining? The memories.
The sad part? The “if only”s……
The silver lining? I am privileged to be your daughter.

The regret? You were gone too soon.