January is Hanuman Jayanti month – and looks like my to-do list is being highly influenced by one of my favorite deity’s tail :-). It’s growing. And growing. Never seems an end to it because am adding new things every day. Oh well, that’s life I guess. But I’ve decided that today, I will make a tentative daily program, time-wise, so that I can tackle my work better, what with the restructuring.

Its funny how procrastination makes some things become redundant after a few days. Thank God for deadlines :-). Mom often said, if it weren’t for the 11th hour, imagine how many things wouldn’t get done. It’s true though because the deadline actually helps us stay focused on the task.

By the way I bought a disco pumpkin yesterday. And fondly remembered, years ago, when Vidur was just 4 years old or so – we had gone to the FoodWorld outlet on Sampige Road to buy veg – and while we were filling our basket, Vidur suddenly picked up one of the disco pumpkins and ran off, with the security guard close at his heels, and me close at his heels, and Mom right behind me! How hilarious it was! 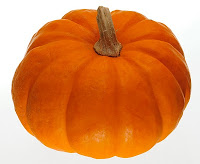