I felt very happy as I went off to bed, into my cozy warm quilt. The satisfaction came from cleaning up the kitchen more in detail than usual, and anticipating waking up in the morning to everything ready and waiting. Ah, but Murphy’s law kicked in.

After a rested night, I woke up as usual, got the coffee going and to the musical sound of the coffee filter’s “tick, tick, tick” as the drops collected in its lower receptacle, I pulled out the mixer-grinder to grind Vidur’s breakfast. I waited for the voiiiiiiiiinnnnng to shatter the silence of the house, but all I got was a voing. Just a super-quick short voing. It was the ominous sound of the mixer conking off. I was not amused. I tried the other jars to see if the jar had the problem, but it turned out that the base’s bush had buggered off, thank you very much. So, after a little quick thinking, I took small quantities of the Chocos in a foil and rolled it over with the chapati rolling pin to powder it. It took a helluva lot longer than usual, of course, thanks to the lack of voiiiiinnnng – but the mission got accomplished. Now I’ve got to go get it repaired.Grrr!

I guess I’ll have to plan a route and cover all the things that need fixing sometime during the day time. The evenings are so cold and often accompanied by a drizzle which is quite irritating to go out in, when I’d rather be indoors and warm. This year it is much colder than it was last year at the same time. One of those totally forget working kind of weathers. Seems like a much better idea to eat and sleep. Ok…there’s no limit to fantasy; never was, and never will be!

I am working on a new short term project and felt a little drowsy after being at it for a few hours. I decided to use my favorite method to come wide awake. I browsed old photos – this is guaranteed to make me laugh and grin – and this time was as fruitful as usual. So here’s today’s picture from the past. This one’s from 2006, and we were probably heading off somewhere. 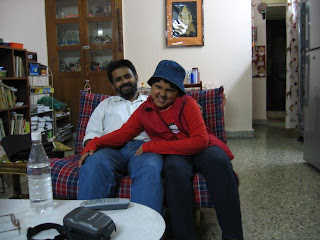 A Rush Of Memories