And those three words sum up any contractor, I guess. Our dear Sid has to come back to finish the “touch up”. I love the way they explain the job they plan to do – and impress the hell out of us. And then, coolly take the short cut. Bunk for a few days. And then claim it is we who wanted it done fast.  Never mind the time wasted, the days gone by. Actually it is quite funny, when all is said and done.

So we decided to just ignore it for the day, because the way yesterday began, was enough to drive me up the wall. Only I can’t climb right now, what with the injury and all. The day began well enough, with a lovely song on the radio – coffee made, lunch planned. After dropping Vidur off at school, I decided to run the washing machine.

What a noble thought indeed. Except the washing machine decided it would take the day off. But from the sounds of it, that didn’t look like a “day off” per se. So I called the service guy and sure enough, he landed up in the afternoon. Of course, my blood pressure was freaking out a bit thinking of the clothes sitting in the machine, soaking away. Once he turned up in the late afternoon, he diagnosed and solved the problem. A sensor had gone phut, which he replaced in a jiffy. And the machine ran. Mission accomplished. Or so we thought. We were thrilled at the way the clothes were semi dry – and hung them out to dry fully. And then, naturally, the skies opened up – it  poured with rain. Okay – that’s one side of it.

I remembered, before this fully automatic machine, we used to have a semi automatic which was convenient in some way and easier to handle. When Vidur was very small – about 2 years old, my mom, he and I would have fun playing in the water. While we washed, he would play with the water hose and taps and freak out. This was great especially in summer. Once, our shower head had conked off – and this dude insisted on a shower bath and gave us the most convincing shower head review ever, beforehand. That summer  was particularly hot. So mom suggested we fix the coffee filter’s top part (perforated like a shower) to the hose. Which we did – and Vidur got his shower bath. What fun!

Sid’s still due to “touch up” the tile grouting. His standard phrase? “barthini bidi” Ha. And a double Ha.

In the meantime, Vidur had to rush a last minute project for the Social Sciences exhibition today – about global warming. We had an enjoyable time doing it – and watching Indian Idol – where they sang some old songs. Ramlu sang Kishore’s “aake seedhi lagi dil pe” – and Rakesh sang “Chunri sambhaal gori”, while Bhoomi sang “kajra mohabbat wala”. Nice effort. Oh, we remembered how Nayan Rathod freaked us with his “aake seedhi lagi” in K for Kishore! That was truly enjoyable.

The powercuts are on again, and just about any time, for any length  of time. So we had a candlelight time-pass yesterday, while Vidur pored over his project.

All in all, not a bad day at all! We were also looking at some old photos yesterday – and after a while, I continued looking at them – and remembered this one! The guy who sold us the “drum” followed us all over eighth cross to convince us we needed it – must be around – umm…2002 or 2003 I think. Still have it. 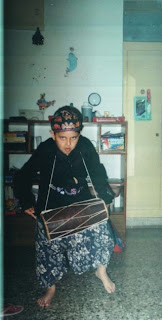