In a big way. What with so many things happening all at once…nobody can say I lead a boring life :-D. To add to the work pressure and various other things, I’ve also been kato-ing the chakkar with the doc about those blood tests. Happily, the results are all okay. But unhappily, the problem persists. So – now I gotta go for an ENMG. So exciting. Has all the ingredients of fun – expensive and painful 😀 – Ugh. But I suppose one’s gotta do what one’s gotta do!

In the meantime, school reopened today – and we had quite a lead-up to it, in the last couple of weeks. We remembered how you would freak us out – with preparation, preparation, preparation. I must say its very inspiring – we did weed out a whole lot of clothes from Vidur’s overflowing chest of drawers and cupboard, only to find that he has grown out of most of his clothes. I’ve also done the same with my cupboard – and now have a nice big mootai of clothes to give away, which I will at the 3-4 places I am in touch with now. And miles to go before I sleep…

I recalled how excited you would get with “School reopening” approaching. You’d get all your clothes all starched and pressed and ready for the week ahead, with matching hand bags. Sigh. Incidentally, I got everything ready last night – but the good ole Honda Activa was still sleeping in the morning. I guess not using it for a couple of weeks drained the battery out. So rather than get pareshaan kicking it, we decided to get an auto-rickshaw to school. Or else, Vidur would have freaked out. Once I got back, I was contemplating kick-starting it, at least to take it to the nearest battery wala. But out of habit, I just started the auto-ignition and lo and behold – the baby just sprang into action. Took it for a ride to warm it up and now, hope the afternoon trip will be uneventful. Ah, here’s a pic of Vidur’s very first day of school, all those years ago… which you clicked…new bike…kiddie in front…:-D 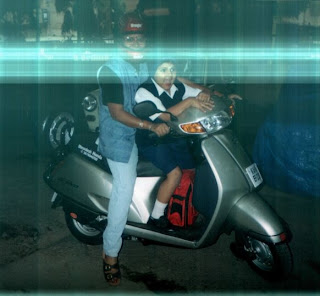 Gosh – remember how we went to the market during the first week, after I got the bike, only to realize someone had stolen the stepney, lock and all? :- They simply cut through the rubber tubing binding the spare tire. And to think that just that morning I had contemplated removing the spare tire and keeping it in the garage! Easiest way to kiss Rs.1500 goodbye! You kept wondering about the place where you’d rest your left arm after you sat at the back – only to find that the whole tire was missing!. Ugh!

By the way Y.Maami dropped by last week – to invite us for Arun’s Poonal  She walked straight in, as if to go to your room – asking “maami epdi irukka” And of course, I had a tough time controlling the tears. She was shocked to hear – and said she would come back next week to sit and talk. Sigh. I gave her kopra with the manjal kizhangu and kumkum. She wanted the empty oorga bottles – so I’ve kept them ready for her.

On the lighter side, we almost had a Russian house guest yesterday – when Sury had to rush to the station as the vehicle that was supposed to pick her up had not turned up. It was late at night, so we thought the sensible thing to do would be to bring her home, since we are so close to the station. I got the Paati-Vidur room ready for her. Later it turned out that the vehicle did turn up, and she went on to the guesthouse. Have to say it was a hilarious experience – showed how much we could achieve in an hour! :-D, considering we had clothes all over the place, since we were in the process of clearing up.

Okay…as the day wears on – it will soon be time for Vidur to return home. I remember how we would miss him when school started, and we’d keep on talking about it – having lunch without him – missing his voice prattling away. There was one time you even cried, because the whole house seemed so quiet with him away at school. And now – I am alone at home, and I really miss the Vidur-sounds. Maybe it sounds silly, but ask any mother, eh?