Even as I was all agog to see the “This is it” movie on Sony Pix, that dude Ranjit messaged me to remind me. Was good fun watching it – it was basically footage from the rehearsals to the grand show, which MJ did not live to see. Well – as it usually happens with music, one thing simply led to another. I saw Phantom of the Opera – and oh, it was such pleasure to hear that song “all i ask of you” – although I’ve heard the Cliff Richard-Sarah Brighton version the most, off the Cliff Richard “Private Collection” album. Sometimes I wonder what I’ll do with all those music tapes. Then I think – I’ll get the MP3 version of all my favorites and then get rid of those. 😀 Long term project, eh? I remember how we ran around trying to copy a VHS tape for Vidur, not so long ago, because we didn’t have a DVD player, then. Ugh, I wish we’d gotten the DVD version of those movies. Talk about regression, getting a VHS off a DVD version!

Cliff Richard took me off into childhood, when Kondu Mama, Gopu Mama and I would sing all those old songs when we played those vinyl records on Sundays! Summer Holiday, Bachelor Boy….:-) I used to particularly like one song “You never can tell” in that album. I thought of Saddulu (the mad one) who would sit and listen to all those songs with me, much later when I was in high school. Seems so long ago – like another life almost.

And then, much much later, you’d phone me at the office just to tell me a Prince song was playing on MTV and hold the phone near the speaker – those were non-cellphone days 😀 In fact, they were also non-Internet days.. I’d feel as though I’d had a quick shot of adrenalin!  Was talking to B-Girl about it… and of course, ended up listening to a whole lot of almost-forgotten songs. Memories are such lovely things – a real quick “upper”.

In the mean time, Amrut’s son is old enough to be in Std I – and I was again remembering how we had gone around picking up admission forms for Vidur for Std I, all those years ago. I happened to browse the school website – and when I came upon the “gallery” looked to see if Master Vidur’s pic featured anywhere – and sure enough, it did! Here they are: 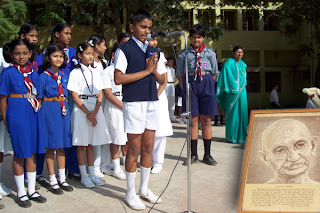 This one’s on Gandhi Jayanthi. Must be when he was in Std.VI – an assembly program, I am guessing. That’s Ashwin at the mic. 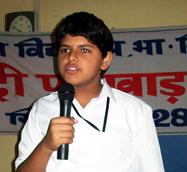 And this one’s the  हिंदी पखवाडा recitation competition last year, where he got First Prize. How thrilled we were, when he came home and told us!

By the way – we watched देख कबीरा रोया on Sunday and enjoyed it. It had superb songs – we’ve heard them a million times – and here’s one I really loved – again, अहीर भैरव – so hauntingly sweet. Of course, the movie had songs by तलत महमूद and मन्ना डे –  oh, I think I’ll play the Talat Mehmood song – since you’ll love it more:

Remember how we used to listen to the Talat Mehmood, Rafi, and Dev Anand hits so often! Sigh. Just as the music lives on, so do you – in our hearts.