That’s what Ms Lizzie is doing. I awoke this morning and while in the bathroom, sensed a movement. Yet to wear my glasses, I was not sure if I imagined it. Then, definitely saw it move. Literally scared the shit out of me, I can tell you. I stood at the door and watched her sinuously sneak up behind the flush tank. Now – it was already 6.10 am and I had no time to waste. So I reluctantly got on with starting the coffee, cutting the bhindi and what not. When Sury woke up, I told him. He managed to bring her out of her hiding, only to have her race up the wall to the corner near the ceiling. And there she stays. Too high to reach. 🙁

I remembered when Vidur was a baby and we were at TIFR – we used to get so scared of lizards. One day we were chanting ‘ayi giri nandini’ loudly because someone told you they will go away. Ha ha to that. 😀 Pesky pests. Arre – remember how that bat flew into our window and parked itself on a suitcase? You hurriedly grabbed Vidur and rushed out to the other room and shut the door! Sury and I managed to cajole it to fly out again. Brrrrr…

People are pretty cool about lizzies, but I could never be… they are so repulsive. There seems no way to keep them out, either – since there are so many trees around and they are also so clever. If we spot one, we try to kill it of course or at the very least stun it and throw it far away. Never mind the silly tale about ‘should not hurt them’. Another ha ha there.

Enough already about the pests! Let’s talk of pleasanter things. Looks like the bunch of movies we ordered will arrive today or tomorrow. Oh, how I wish you were here! Would have been such fun watching them together. Got a whole lot of Kishore Kumar ones too. Many hours of pleasant times!

Vidur, by the way, is now in the Fifth year in his music class, effective April 3, 2010. Poor chap couldn’t go to class on Sunday – thanks to a bad cold and general exhaustion. The heat is really sapping our energy.

Incidentally, I got a nice surprise two days ago – got a lovely mail from Jyoti – remember she lived in Shanti Nagar and we went to Davar’s together? She has two daughters and a son who looks amazingly like her. I remember so well how I saw a queen sized fridge for the first ever time in her house. 🙂 I had also taken her dad and mom along for a photo shoot for Rasna I think – am not sure – when Vineeta Dutta was in town while at ACIL. Her mom passed away last year, I was sad to hear. It is such a warm feeling to connect back with someone with whom I would get along so well. Brought back a whole lot of memories for me. It was real fun, back then. We had such an eclectic group – notably long Usha. Wonder where she is now. 🙂 What a crazy thing she was!

But not all people are as friendly as they used to be, mind you. Not surprising – the years have gone by and priorities have changed. One wonders – how well do we think we knew them anyway? Can’t complain though. One cannot probably be the same at 40 as one was at 20 – classic example is of bubbly women who get married, have one kid and assume that’s all there is to life. Finito. Will not talk about anything other than their festival purchases, kids, husbands, problems – not necessarily in the same order. Who cares. 😀

We were always so unconventional about the standard stuff.

Here’s today’s pic – Vidur – in 2000 – Remember how he loved that T-shirt because it had that lion on it! He’s holding leaves from the terrace after you and he did a chakkar there. He would do the mariamma dance with those leaves 🙂 I also see him wearing my new chappals 😀 – You had stuck all his hand-work on the door. I especially loved the expression of the bizarrely orange sun – always looked tipsy to me. 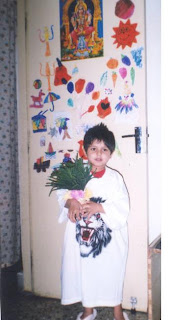 I need that coffee, Mi. Desperately.