Back to the grind

Let me do diary style stuff here now:
15.4.10 was dress rehearsal for Vidur at school. Half day-school and thereafter, practice, practice. They had gone off to the Gymkhana, where the venue had been shifted, thanks to the uncertain weather. Imagine it pouring down just before the program! Well – naturally the clothes he wore came back soiled to death. No way we could wash and press them for the next day. So, we set off to 8th cross to buy him a new kurta set. Thought it was a good occasion as any to get him one. 🙂 We got a nice orange kurta with some jhalak done at the neck and button strip. Here’s a pic of him in it: 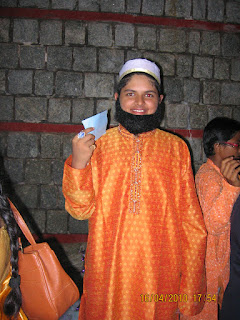 If you are wondering what’s that blue thing glittering on his right hand – it is his brand new ring :-D. On a whim, after we got the kurta, I walked into an “IMMITATION” Jewelry shop – and found this. Vidur was mighty thrilled with it and insisted on wearing it right away. Here’s a close up: 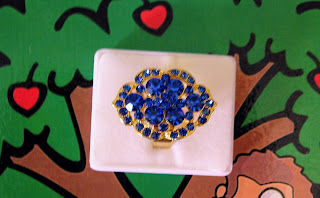 I still can’t help grinning when I think of it. But you know what? I am the boring dud here – because I suddenly noticed people wearing 3-4 rings like this all at once. So – so much for me thinking I am crazy. The others win hands down. Ok – I took a pic of the ring on the new desk – to give it a fun background 😀

On Annual day – 16.4.10 – the day dawned totally bright and clear – naturally. We had to be at school by 1. Apparently they decided later that it was enough for the participants to arrive at 2.45 – but no one conveyed the message, ha, ha. So, we went and sweated there after a lunch of paratha and paneer butter masala. Now suddenly Vidur has stopped eating the MTR ready to eat stuff. He prefers that I make it at home 😀 which is really cool, because I think the home made thingy turns out a lot better. Also – we put a whole lot more paneer than the ready to eat pack contains.

So – after I dropped him off at school and chilled with the kids for a while, I got back home, so I could go to the Gymkhana at 5 in time for the program.  Remember how we’d both take Vidur early and stay there? Well – Vidur has grown up and he was keen to pack me off :-D. What bliss!

The Gymkhana auditorium was quite nice. And Mi – we had a great time at the program. It was the best Annual Day so far. The new principal, Ms Anu Thomas – she has taste. Beautifully organized, perfectly ordered – we even thoroughly enjoyed the annual report she presented as a PowerPoint. It was all professionally done. The cultural program was great – with all hired costumes giving it a totally prepared look. And the school’s achievements – WOW!. Ms Thomas has been awarded at the National level as the Best Principal. How proud we felt as they listed each accolade the school, its students and the teachers had won!. Well – it was all collars up for the students. And we – we were happily basking in the glow of Vidur being in that school – with a great year behind him – after topping his class in the final exams – it was great. I really wished you were there – remember how we kept talking about you coming for the Annual Day celebrations this year? We were so sure, with your progress that you would definitely be able to sit for 2-3 hours and enjoy the programs. What can I say? Feb 3-8 was a rude shock.

Vidur’s Hindi skit was a hit. 😀 Here are some pictures – the kids all looked fab. Ira looked gorgeous as Ammi Jaan – Lakshmi looked lovely as the veg seller. I had such a warm feeling – thinking how I’ve seen these kids grow up, almost every single day from the time they began school in the 1st Std. Arre – even Ms Ambili’s son was in the program. So cute he looked – with a little toy guitar! Here are some pictures backstage and on stage:

I remembered how we would rush home and quickly upload all the pictures and see them on the screen – you would be so eager, even if you had seen it all live. Sigh.

So – Saturday and Sunday were off – and it was a big relief for Vidur. I spent most of Saturday clearing Clinicom stuff. As usual, I have loads of pending work to clear. I wondered if I would go mad. Then I tried to recover 😀

This morning we got a bit panicky. First of all I woke up at 7 – which was enough to send me into a major tizzy. Then – I boiled 3 packets of milk and one after the other – they got spoiled. Ugh. The fourth one behaved itself and then, thanks to idly for lunch, I was able to do things quickly. I even got Vidur to school on time. So now totally relieved. Had to postpone my Kaapi until I got back but it was worth the delay. 😀

I have a MUST-do list today. Going nuts. Let me see how much I can accomplish.