That is what the newspapers say, Mi. Highest in 25 years, apparently. What is so surprising though? With all the construction going on and the crazy increase in traffic and population, this is only to be expected. Okay – so we could have done without the frequent powercuts 🙂 But that ain’t in our hands! I saw a question on someone’s site asking where we find God. 🙂 I found God in you. But I also find God in several other things. At this very moment, even as I am writing, I find God in the tasty frothy yummy kaapi am sipping. I’d say – everything that makes me feel good is God at work – no matter how big or trivial.

Vidur had to go for drama practice on Saturday. He’s acting as abba-jaan. We did go to the mosque and get a cap for him. See him in his practice clothes: 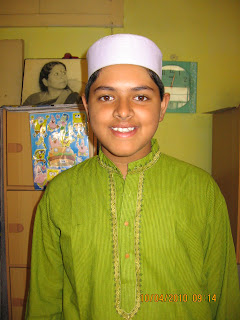 Looks like a well-mannered Muslim boy, no? 😀 His teacher thought he looked damn cute. He kept the cap on for quite some time 🙂 I was telling him how much I wanted a burkha those days and how you had scolded me for not telling you when you were in Madrasa-e-Burhania – but I think I wanted it much later. Vidur was thrilled to hear this. Then I told him I thought it would be so cool to bunk and go for movies 😀 without being spotted and he gave me a stern look. He he he! I suspect he thinks am a bit too freaky, the good fella that he is. I always think twice before telling him something particularly silly or naughty that I may have done – 😀 he looks so shocked sometimes. What can I say – his exposure has been a lot lesser than mine – I always think technology is not enough. The people-therapy is important. So unpredictable – and never ceases to amaze and surprise.

Ah – I also took a pic of Vidur in his white full pants (first time, no!) Except that I forgot in the morning – and took it when he returned from school – so that early morning savoire faire is missing – and he’s just a tired little boy (okay, not so little!) standing just outside the garage of all the places. I should have clicked one outside his school, at least. I will do it one of these days. 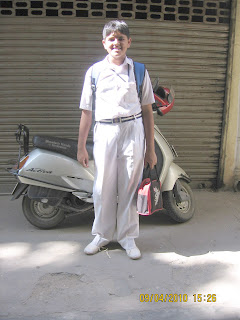 On Saturday night, like an idjit, I slept late. Too late – 3 am ish. Partly because I wanted to finish something, and partly because there was a movie on TV that we suddenly started watching. You know how we are – random surfing and just settle on something that’s interesting. This one was gripping actually. What is the name of the movie? Mi – come on. You know better than to ask that. 😀 Of course I don’t know.

Yesterday we watched Hum Sub Ustaad Hain  and Bewaqoof – both Kishore Kumar movies. What fun. Bewaqoof was better, actually. You know who plays a young Kishore Kumar? Vinod Mehra! So cute and innocent he looked. You know how we are always looking to recognize any child actor/actress we see. Really amazing this was.

By the way – the building has started a ‘waste management’ thingy. We now have two huge bags in which we must segregate plastic, glass, paper, cartons, etc. They are supposed to pick up once a fortnight. I think that is a bit too infrequent because you know how the bags will fill up quickly. Anyway, we are taking care to see we put totally dry stuff that won’t attract pests.

Incidentally, did I tell you we Sury finally stunned the lizzie in the bathroom the other day and sent her out into the fresh air? Urrgh!

I bought a pink tshirt – you would have loved it. Very nice it is – supposed to be a ladies tshirt…not the usual dhol dhol XL ones I wear. I am so used to wearing the large ones – that I was pretty sure this wouldn’t fit. But it actually did. So am planning to go buy some more. I remembered once, when I was taking Vidur to the British Library, I wore a black tshirt – and you were shocked to see me actually wearing something my size. You scolded me for always looking shapeless in casual clothes 😀 – Well, at least I wear salwar kameez that fit nicely, no?

I made custard with fruits yesterday. Day before yesterday – I thought of you so much when I made more-kozhambu – you loved it so much! I am yet to control the quantities when I make rasam 😀 How we would enjoy it watching Thiruppavai! – Oh by the way, caught ten minutes of it last week – now Desikachari knows who Kodhai is…he’s mad with his wife for not telling him earlier – our Ranganayaki faints and is admitted into hospital. That’s all I saw. Vidur stopped watching Thangam – it had become so boring!

Oh – by the way Mi – Cheenu anna passed away the day before yesterday night. So sad no? After over three months in coma! I called and talked to Usha, Lakshmi and Balaji. And also told them to convey my feelings to Soni periamma. Spoke to Kamalu periamma also – and had a long chat. I was recalling how you wished, when we first heard about Cheenu anna’s coma – that God would take your life and make him get back to normal. God had other plans, it looks like. I hope you have fun up there – with Cheenu anna fighting with you for Chiththi’s coffee! It all boils down to coffee no? May your souls rest in peace.

I wish you were here, you know – I would have made so many types of juice and what not for you! We think of you all the time. We removed that pic of you from the puja room and placed it in your room where we hang out. Sury keeps saying – see, paati is watching. 🙂