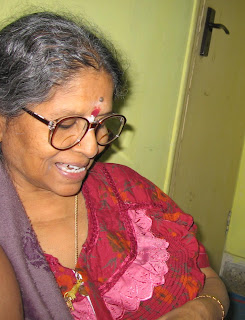 I am imagining you sitting back with that nice smile you have – the i am-pondering-over-what-you-said–and-amazed-how-people-can-be-like-this. But you – of course- never wanted to believe or think ill of anyone. I tell you – Mi – I never want to be like that. You won’t believe the kind of shit condolence messages am getting – people pretending that they loved you. Who needs a love like that? No one. You always taught me by example to be sincere. One might have thought that this would have rubbed off on the people who came in contact with you. But no. Right now my blood is boiling at an email I just read from my ‘uncle’. Professing to have been devoted. Excuse me. In my book – when I care, I show it, I express it. After over 40 years of silence, I am NOT grateful to listen to some totally self-indulgent ranting.


WHO needs a love like that? Definitely not me And neither do you.


On a brighter note, Krithi dropped by yesterday, spent the day with us and left by the night train. Apparently he rang the doorbell thrice – and I only opened it the third time. We had all slept late the previous night – Sury worked late. Vidur and I watched ‘Khandaan’ (the 1942 version with Noorjahan) till 12. He had ordered some ancient VCDs and they arrived Saturday evening. He was mighty thrilled and begged to watch it. By the time we actually slept it was 1 am – me after winding up some work I was doing. Well, we spent all day yesterday reminiscing about you; later in the afternoon, Krithi insisted on taking Vidur out to buy him something. We went to Crossword and this chap got a couple of books. Vidur was so restrained yesterday – not a chirp or a bubble from him :). I must confess I spoke to Krithi frankly and found it quite cleansing.  He didn’t seem aware of quite a few things. Hmm.

Sometimes it feels good to voice things. But not always. I realized that. After I read someone’s comment on a blog today, I was laughing my head off. It said  “I also think what happens to my blog after i am no more?” in response to a post about what we leave behind. Indeed.  Actually, yesterday afternoon was thinking the precise thing – what will happen if I died suddenly? Just imagine – all my junk, my clothes, my collection – the thinking about it alone makes my head reel. Enough to give me palpitations! Am thinking I should slowly start giving away stuff, Mi. We take nothing along when we go. 🙂

Don’t I sound like a total mess today? Must be the head-cold. No I won’t go to the doc.

Here’s a personal favorite pic of you. 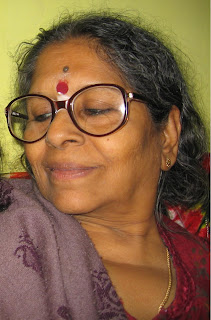 One thought on “Who needs a love like that?”