Mostly about the boy…

It all began on Friday, when we saw a bunch of hair dangling from a wire outside the lift, probably courtesy the upstairs folks. Felt totally grossed out to see it. After I dropped Vidur at school and got back, I determinedly got a broomstick and went at the outside of the house. Thanks to the recent tiling on either side of the lift entrance, we had a nice layer of cement covering the window glasses and the ledges – so I dusted all those and felt quite satisfied when I walked back inside our house.

Then I sat to work. Soon – too soon – it was time to pick Vidur up from school – exam time, you know..so just two hours after I dropped him. On the way back we yapped like a couple of little boys. We stopped at In & Out to buy sugar, and of course ended up buying some other stuff too. Just next to it is KaatiZone – and we decided to check that out as well. Quite nice, the paratha roll with paneer jalfrezi.

After we got home, I was putting things away. As usual I started ranting about how I just don’t have enough time to clean house and of course, went off into a verbal trance about how spotless our home used to be. Then – Vidur – yes, our very own dear little boy said this: “Don’t worry Mi – together we will reorganize the house. I know what the problem is!”.

He did? That was news to me.

So I asked – “What?” He says: “In one word – segregation. Segregation is the main problem in our house”. I am totally impressed. Entha thelivi raa! My God. He really must be a chip off the old block!! ( I meant you when I said ‘old block’ :-D) That dialog was not the end of it. He went on to say exactly how he wanted to go about things – with extremely workable solutions!

Now – I really don’t know if he will actually help get things in order. But I must say my heart (and my eyes) were quite full just to hear his words. God bless him. And of course, wish you were here. You’d have loved it.

He had another brilliant idea: Instead of ” one night at the call center” as the prize, the school could have very well given them one or two text books for the next year!. Imagine – cost of two or three text books equals One night… Why don’t adults get brilliant ideas like this? OK – if text books are an issue – why not a geometry box, a set of blank notebooks – more generic and easier to shop no? Well – Out of the mouths of babes…

Our newspaper shelf had just begun to spill over. And coincidentally, Square came. What was funny was, Vidur answered the doorbell and came and told me, in my ear, Square is here. Other than the paper, I also gave him two nonsticks.  Remember how he would keep on pestering you? Hmm. He asked for notebooks and I said, perhaps, maybe – we could wait till the exams are over?Never mind the results. Crazy fella.

Oddly, this reminded me of how Vidur, when he was 6 months old, baffled us with his ability to scatter newspapers all over the room from the newspaper shelf – with mobility restricted to swimming on the floor on his tummy. We then shifted the papers to another place, very cleverly we thought – and put four telephone directories there, only to discover he had the strength to pull them out and tear up the pages. So helpful! Gosh, what fun. Remember how, when he was only 8 months old – I once brought you bread and milk to eat as you were not well – and he assumed it was for him – kept pointing out to it and just finished the slice!!

Yesterday I made lemon-tea for myself. Somehow in this heat the milky tea seems boring. I remembered you so much while drinking the lemon tea – how you used to love it! For every sip you’d comment on how nice it was! Later in the evening I sneaked in a glass of grape juice in the freezer and had it later. Yummy. I immediately thought of how you’d remove the pulp off those mangoes and freeze them for me. It also reminded me of my dear old 5 paise ‘chuski’ at school. The chuski-wala would add a dollop of honey for the 10 paise chuski. I’d salivate looking at it outside the school and you’d never let me have it 😀 I’d also long for the “toffee” hehehe. Remember how Gopu mama would describe that guy’s habits? eeeeeesh.

Hey by the way – these days I keep oil in the big tumbler. Its very convenient you know. Easy to clean. Wish we had thought of it earlier, no?

We watched an Amitabh Bachchan-Sharmila Tagore movie yesterday called “Besharam” apt name we’d say. Movie was totally implausible. AB quits wearing kurta pajama and starts wearing suits – and nobody recognizes him. The best part of the movie was Amjad Khan – that guy is a treat to watch. He’s the villain of course. And an amazing  comic.

I realized we haven’t made adai in ages. I am thinking of making adai tomorrow. Why not today? Because I must check with Vidur whether he’s in the mood for it 😀

I also realized I must finish all that udad dal etc. My target is to clear out store room stock by at least end-May so that we can plan afresh. Remember how we did that every year? Hmm….sigh. Maybe I’ll use it off for idly and all. Plus – still need to make those podis!

Incidentally – Sury put a pic on the desktop  and it had you, Sury, me, Gopu mama and Radhe mama. Vidur saw it and said we didn’t include him in the family pic. So this is what we changed it to: 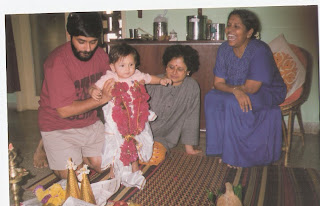 Now don’t ask why its a bit konal – it’s because it was scanned that way! I wish I could hear that laugh of yours again!
Vidya Sury

2 thoughts on “Mostly about the boy…”