Vidur and I dropped by at the Seva Sadan yesterday evening around 7.45 pm as we had arranged for the day’s meals. We thought it might be a good idea to drop in during dinner. The lady there speaks only Kannada and I had some good practice with the language. The lady looked blank whenever I said something in English – luckily I caught on to it in the beginning. Five minutes later, we heard the kids beginning their prayer and got invited into the dining area.

There, we saw 58 children seated in four rows with large steel plates. At the far end of this room was a large Pooja room, very nicely maintained – and gave the place an air of – for want of a better word – blessing. As these children sang their prayers, they were served rice by three older girls. Once the rice was served, the girls brought sambar and began to serve that. I was pleased to see them asking the kids where to pour the sambar, as some kids wanted it on the rice, some wanted it by the side, some wanted it partially on the rice and near it. I could feel the friendliness in the atmosphere. Around 8.10 they finished serving…and after another prayer began to eat.

And what was Vidur and I doing all this time? Vidur watched curiously, while I – I cried my eyes out. I felt quite ridiculous about this later but at the time, I just could not control myself. I kept thinking of how you would have tucked in your pallu ~ and become one in that crowd, serving them, talking to them etc.  I had a medley of thoughts in my head. I thought, I could have very well ended up in an orphanage, or worse.

I suddenly remembered how, when I was two years old, and we were in Delhi. It is very strange how certain early memories are almost imprinted in the head. At the time, you were dumped in a mental institution by Shivamma but you managed to escape from there and come back home. You were not allowed to come into the house; I was sitting outside and was thrilled to see you. Then Thatha took pity on us and took us to the station, got a ticket for Mumbai and put us in it, with a glucose biscuit packet for the journey. Through the two-night journey on the train, you were sinking. The mental hospital had infused some gas through your mouth that made your gums bleed. Somehow we made it to Dadar, where we got off the train. Believe it or not, Mi, I still remember holding the little suraai someone in our compartment gave me and refused to let go. We got off the train and you just fainted while I stood nearby and cried. A crowd gathered. And who should turn up, but God!! I mean Kondu mama, our very own good samaritan.

Kondu mama had the practice of helping any and all people – feeding them, giving them money or medical assistance. So imagine his shock when he saw his little sister lying there, bleeding out of her mouth and his favorite niece standing there pathetically! Well, he got us pronto into a taxi and took us home. Apparently I kept chanting that I hadn’t eaten for two days. (six biscuits are not the dietary recommendation for a two year old for two days). Once we got home to Andheri to grandma, you were rushed to hospital and I was taken care of at home – bathed and fed. You were in hospital for a few days until you regained consciousness and then brought home.

So – thinking of this – why would I not cry? If Kondu mama had not turned up at the station, I can’t even begin to imagine what  track our lives could have taken! I felt grateful for all the things I have. And a little ashamed of things I complained about. All in all, it was a cleansing experience – and I resolved to do this more often. I think I will sponsor at least one meal a month there. I plan to go over next week and make the payment. It is the least I could do. 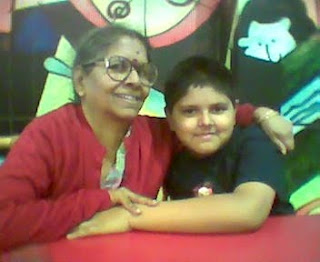 Hmm – here’s a pic of you and Vidur at KFC – what fun we had that day, remember? First the British Library, then KFC, then Sapphire, then heavy rains before we got that autorickshaw and got home!