And Miles To Go Before I…

Its a muggy morning here and we lethargically went about our routine. Powercut began at 8 am – nice and early eh? What can I say – the government wants me to stay fit by using the stairs instead of the lift! By the way, Senthil called early this morning. I had sent an email the day before yesterday and thought it was really good of him to call as soon as he saw it. Which is more than I can say for some people!

It was one of those mornings when everything had to be refilled on the kitchen shelf – coffee, sugar, Horlicks and Mao Tse Tung. It was dosa for Vidur’s dubba – and I’ll have the same thing too. I still haven’t gotten around to making those podis. You won’t believe how full my schedule still is – so ‘having time on my hands’ is just a fantasy for now. I had a big burst yesterday; I got over-frustrated with all the stuff looming up – and had a good howl. And felt gradually better. You know how I always get over things if am quiet for a bit. As it happened, the thing that triggered the outburst took a bit of a fizzle – and 😀 as usual – my delay turned out for the good.

We went to the corporation office yesterday to collect the certificates. After giving the guy ‘something’ he handed over the papers quite amicably. Sury kept worrying that they’d give us a hard time or at least make us run around a few times. Somehow, I never like to pre-suppose these things. We’ve generally had good experiences at most of these places. I feel that as long as we have things in order, the probabilities of success are a lot higher. If not, at least we needn’t feel guilty, yeah? ha. So relative.

Talking of relatives, no calls since the last week, which is good for me. I could do without the pressure. On the way back from school, I stopped at Ganesh Medicals to buy Digene and Dolo and paid for them. Couldn’t bring myself to converse with the guy like I used to. My ability as a stand-up comic seems to have taken a temporary rest. Sigh.

You know what? Vidur, Sury and I still huddle in your room in the evenings, watching CID and talking as if you are still there. To me it seems quite healthy – because we love you so much and you’ve always been such an angel. Even this morning, while refilling those containers, I remembered how, when Vidur was about 3 years old, you’d sit him on your lap and tell him how these bottles were all empty – and he’d shake his hands this way and that to show ‘khaali’. Then you would hug him and squeeze him and ask him what he understood and he’d just laugh.  Also reminded me of Vishnu (Shnu) and the eli episode, the athiya episode and what not. He has a Wikipedia page!!

Now, now – you know what happens when we step into memory lane. So here’s today’s pic for you – remember when we clicked this? Coolcats? Vidur and you? YES! 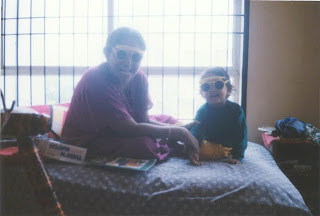 Let me get that life-saving coffee…yeah – I hear you!!