It’s hard to believe that it is only the third Thursday after Feb 8, Mi. We still think you’ve gone somewhere and will be back. We almost filled the little bottles of water. Yesterday at 5 o’clock, I almost mixed the Ensure for you. At 4 o’clock, I almost brought you the box of orange wafers you like so much.

Today, I almost bought the maroon carrot because you love it so much. Yesterday I almost put two sets of salwars in your cupboard which I came across in mine, because I thought would be comfortable for you. Yesterday morning, I almost opened a pack of Dove soap, which you love – which I had bought for you. Vidur, of course, calls me or Sury paati now and then.

When we step out, Sury and I still think we have to rush back home, because you are alone (even if Vidur is there) and you might worry. Two days ago I had this dream. In the dream, I was waiting with your bio-data to meet someone who wanted a head for her new school. And when I did meet her, she opened the document I gave her and looked at me – and said – this is a death certificate. Then I looked at her and cried, saying, oh, I forgot, my mom is no more. 🙁

This reminded me of 1980 – when paati wanted to move to Madras to be with mama. You were working in BHEL Higher Secondary School, Hyd and were about to get your quarters allotted. You had even gone and chosen the one you wanted. Ms Padmavathy was so encouraging and we dreamed of living there together, in that pretty cottage type home. Then paati insisted that you should quit your job and move with her to Madras. She might as well have killed you off right then. In spite of imploring her, neither she nor mama agreed and forced us to move with them.  I had just finished Inter at Kasturba and was looking forward to going to degree college with my friends. We were rudely uprooted from the place we loved, from the job you loved, from the people we loved, to lousy Madras where we neither liked the people nor the weather. Worst of all, we landed up exactly where we did not want to be.


You had to walk in the hot sun going  from school to school, literally asking for a job – after leaving a perfectly secure and prestigious job in Hyd. In all this, ‘they’ would not believe you when you said you got a job. They would send a spy behind you to check, just as they did later when you went back to the Bohra school you worked in, in 1973.  Who knew who you were talking with eh?

When you returned home from your job search unsuccessfully, initially, you would never even be fed. You would be made to sit outside the house in the hot sun. You would have to listen to all kinds of unkind words from the people who professed to care for you. You never protested because you didn’t want to hurt your mother during her last days.  For my part, I was going from college to college for admission, which was difficult because  the curriculum was different in Madras compared to Hyd. Finally it was decided that I be sent back to Hyd to live with mama and join St.Francis there. Then in Jan ’81, paati had another change of mind and wanted me also to be with her. And so I had to pack up and come to Madras. I remember being shocked when I saw you – because you were looking so harassed. My mother, my idol when it came to looks and appearance – soiled and sad. There was worse though. You were going off to Salem to join MALCO Vidyalaya there. You did, and things didn’t work out there. You came back home, and weren’t welcomed. You were abused, saying you couldn’t stick to a job. Excuse me. The height of horrible this was. Then began the saga of job hunting again, until you found one. Life couldn’t have been more pathetic. I was being cursed because all the colleges in Chennai were at the end of their second semester, finishing their first year, while us Hydies were just settling into the first year of college. I however managed to get into Ethiraj and remember how I adamantly wrote all the 8 papers at one go? Even though they allowed me to take them later. Just to prove to one person that we weren’t duds to the rest of the world. That I was a distinction student is another story.


But what you went through – is unimaginable. You were forced to quit a secure job in Hyd, give up all the benefits, annuities and pension – give up living a lifestyle that would have kept you healthy, give up a good life, and go through unimaginable harassment – all because they claimed to know better. How, pray? They were doing it for your ‘good’. I fail to understand this theory, bright as I am. You were a single parent and educated yourself after I was born. You qualified yourself for a profession as a teacher, which you loved. You established yourself in a good, highly paying job you could have retired in. Yet, for your good, you were forced to quit, and suffer in lousy weather in low paying jobs that barely sustained us. Plus, slogging during the weekends like menial labor at someone else’s house. Being treated badly. Our idea of security? Not. We just existed. We had a bleak future to look forward to, ahead. If your mother was so keen on having you with her, she could have also enjoyed a cozy life with us in Hyd. Yet she chose to move to shitty Madras so that we could all face mass-harassment.


Luckily we escaped in 1987. You don’t know how furious I get when I think of all that happened to us. I was boiling through the time I had to wait, so I could go to work, and take us back where we belonged – from Madras to Hyderabad. And I did, against all odds. For that, I know how grateful we both were.

Enough now. More later. 🙂 Here’s today’s pic. Remember what a lovely time we had at the Planetarium? And the musical fountain after that which played to ‘Made in India’ by Alisha Chinai. Vidur was so fascinated with the jumping water. 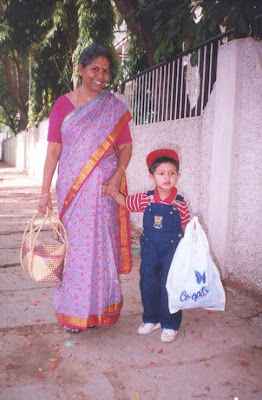 We seriously love you, Mi.