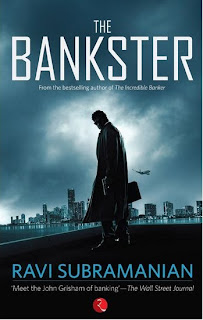 Ravi Subramanian is the award winning author of four best selling books : If God was a Banker (2007), I Bought the Monks Ferrari (2007), Devil in Pinstripes (2009) and The Incredible Banker (2011). His first fiction novel, “If God Was A Banker” was published in 2007 and went on to become a National Bestseller, selling over 200,000 copies and winning the Golden Quill Award for Readers Choice in 2008.

Now let us look at the official synopsis of the book:

Bankers build their careers on trust, or so everyone thinks, till a series of murders threaten to destroy the reputation that the Greater Boston Global Bank (GB2) has built over the years. Who is behind these killings, and what is their motive?

When Karan Panjabi, press reporter and ex-banker, digs deeper, he realizes that he has stumbled upon a global conspiracy with far reaching ramifications a secret that could not only destroy the bank but also cast a shadow on the entire nation. With only thirty-six hours at his disposal, he must fight the clock and trust no one if he is to stay alive and uncover the truth.

The back cover says:
In Angola, a covert CIA Agent is about to exchange weapons for blood diamonds.
In Kerala, an elderly man will do whatever it takes to fulfill a promise made to a dying son.
In Mumbai, an international bank is stunned by the mysterious deaths of its key employees.

Ravi Subramanian, the author, is a good story teller and keeps you hanging on, guessing and second guessing, never disappointing with a twist in the situation. Nothing is as it seems.The book begins with the story in Angola, then moves to Kerala and then Mumbai – three parallel stories running their course until the connection is made toward the end of the book.

Most of the book revolves around the GB2 Bank in Mumbai and I enjoyed how the author has a great understanding of how things work within and without – not surprising though, considering he’s from the banking industry. Still, writing it in a plausible way is important – and one can easily visualize the story as it unfolds. The characters are totally believable, and the situations realistic.

As the three stories gradually fuse to two, I found myself slightly confused about how they connected. One thing though – this book must be read in one sitting; reading it in bits and pieces can make you lose the thread of events.  I found the last hundred pages quite gripping, even though I knew how it would all turn out.

The author has an easy writing style that keeps you engaged throughout the book.  And I liked how he has kept in tune with current events, a la the nuclear plant tussle. I liked how he tied up the connection between Mumbai and Cochin in the story on Page 232.

Ravi has a penchant for making the reader wonder whether a character is really what he or she is. Many times, I found myself wondering whether a person in the story was a good guy or bad guy.

I was quite delighted to see the name “Vidur” used for a character in the book, for obvious reasons. Another thing that thrilled me was the reference to Columbo – my all time favorite TV series on Page 142 when the Viennese police talks about the unraveling of crimes in the impeccable style of Lt.Columbo.

I love how there are book launch trailers these days. Here’s the one for The Bankster

And what review by me would be complete without cribbing about at least ONE proof-reading error? Okay, I got two.

That being said, I do recommend the book. It is a good read. And I would definitely read Ravi’s other books since I haven’t, yet.


This review is a part of the Book Reviews Program at BlogAdda.com . Participate now to get free books!  Thank you, BlogAdda for your infinite patience with me.