So the long weekend has passed – and the work week began on Tuesday, for Vidur and me, anyway. Sury was off to work yesterday as usual. But we had a real nice longish weekend. Though Diwali was low-key as we were missing Mom much, and her pure enthusiasm, we did manage to make gulab jamuns on the day, since we did not get around to buying sweets, as we had planned to, what with having to go to the dentist for the on-going root canal the previous evening. I did however insist on getting some new clothes for Vidur, which we did, although Sury kept on insisting I really ought to go straight home from the dentist and rest. Tooth hurty, you see. But I figured that if I got back home, I’d just sit and hold my cheek and focus on the pain. Far better to be walking around in the slush and cussing people for splashing us with the yukky water on the road as we legged it to the store where we had to see the clothes.

The next morning, Diwali morning, we just sadly oiled our heads, and subdued baths followed. Each of us swallowed a little 4 mm diameter lump of Diwali marundu left from last year and stored preciously. I quickly put away the remaining at the back of the refrigerator’s top shelf for next year. I hope. We then had lunch. Later in the day, Uma suggested we visit them,  but we wanted to go out to the mall and check out a few places, and that’s what we did. Had a nice-ish time, returning home by 9 ish. It was so exciting to think that the next day was Saturday, and a holiday for all. We had a pleasantly lazy day, deciding to clear up that part of the living room where we tend to stack up give-away stuff. The brilliant idea of ordering pizza occurred to us, and without the pressure of cooking looming over my head, we got right down to cleaning up the toy trunk.

Now, it almost looks like we’ll achieve our goal of clearing up all our extra stuff by the year end. Yes, December is only next month, but how time flies, when there’s a long list of things to do and plenty of obstacles to stop you from doing them! Murphy’s Law! In the afternoon, Vidur went to music class as usual, only to find the place all locked up. He waited and returned home half an hour later. Apparently this weekend’s music classes were off – but he obviously hadn’t registered it. Well. We all settled to watch a couple of Jaishankar movies and enjoyed them thoroughly!

Sunday was even better, because we could all sleep in – what with no music class at 8.30 am. Otherwise, I am up early on Sundays also, with Vidur following close behind to get ready to go to class. It turned out to be a massively rainy day – and for a change, we spent the day in the living room. I simply refused to go near the computer after quickly checking email in the morning. And what fun it was! After lunch, I actually napped, watching something on TV, book in hand, eyes shut!

After tea around five-ish, we decided to give our shoe cupboard a makeover. I had actually been wanting to relegate it to the garage and buy a new sleek one. But suddenly it occurred to me that it is a perfectly good cupboard and all it really needed was a coat of paint. This led me to the idea of collage-ing it with pictures. So we just freaked out – and now, voila! we’ve got a bright and cheerful looking, um……shoe-cupboard! Still a bit of a work-in-progress…but what the heck. We had fun, as I said. 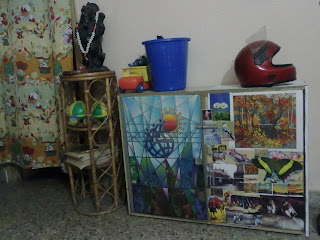 Whatever it is, it was great quality time together, laughing and joking. Dinner followed, and sigh, we all went to bed, hating Monday for being next.

As it happened, I had told Vidur he could skip school if the heavy rains continued. Monday morning did turn out to be wet…and Vidur woke up with pain in his legs. Much much later, it turned out to be the result of some serious bending exercises father and son had gotten up to on Sunday evening, after being cooped up inside the house all day. All well, unused muscles waking up. We did spend a cozy Monday at home with a visitors dropping by. All in all, a coool, nay, cold weekend, warm home!

Now, its back to the work week. And much planning to do.